Today I am going to be reviewing Taking Wing by Clemency Crow, Book 1 in the Feather Down series. I was lucky enough to be sent a copy of this book by the author in exchange for an honest and fair review. 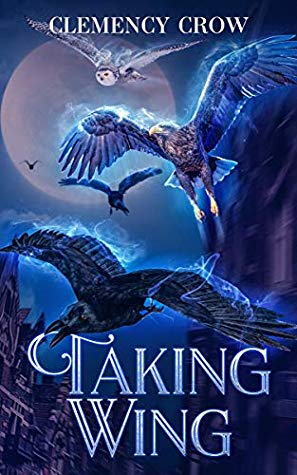 Twelve – year – old Freya enjoys karate and is the only one in her class who’s trusted with a part – time job. But everything changes when she meets a boy with yellow eyes. She learns about the guardians, and how an age – old fight has prevented them from fulfilling their purpose.

Freya finds new friends in the Crow tribe, but not everything in the castle is blissful. A destructive shadow lies within her and all she needs to do to release it is close their eyes.

But as the guardians’ war rages on, Freya realises that, although the shadow’s power can be useful, it can’t create peace. To do that, Freya and her friends must solve the mysterious crime that began the war. Can they bring the guardians together before they destroy each other?

Taking Wing follows Freya, a very sensible and responsible twelve year old. Her life is perfectly normal until she meets a boy with yellow eyes and her life changes forever. She is thrown into the world of Celtic tribes with magic that she doesn’t understand and the ability to turn into birds.

Freya is taken under the wing of the Crow tribe and it quickly becomes apparent that there is a war raging between the tribes and she is apparently the human that has be prophesied to help them end this war and bring a time of peace. This is obviously overwhelming for Freya but she steps up and soon makes some good friends within the tribe and she begins to learn more about herself in the process.

It was fantastic that Freya felt like a twelve – year – old throughout the whole of this book, whilst she was mature, she wasn’t too mature for her age. This felt right for the book as often when adults write children, they can make them seem too grown up for their age. There was a wide range of characters within the book and their names and characters suited the Celtic origins of the book. I loved Winnie who becomes one of Freya’s friends in the book. She wears her heart on her sleeve but will fight for what she thinks is right and she proves that she is just as good of a fighter as the men!

This book dove straight into the action and the action didn’t seem to stop from the first page on wards, I would have loved this at 13 – the target age group.  As an adult, I found it difficult that there wasn’t so much backstory or explanation of the Celtic history and history of the tribes. But, as this is not a book aimed at adults, it was perfect. It set up the series perfectly and I can see these elements will be spread throughout the series in an appropriate way for the target audience. I’m sure that if I had read this at 13 I would desperately be trying to tap into the same source of power that the tribes use in the book.

There are some darker scenes with talk of death and murder which may be upsetting for some readers, so this book should be entered into with some caution. It is very much the bridge between Middle Grade and Young Adult, it is not explicitly Middle Grade.

It’s hard to discuss the plots and the ins and outs of the book without spoiling something as this book is so action packed with a few twists and turns that will keep any 12 – 14 year old (and some older readers!) hooked from the first page to the last.

The ending of the book leaves us with a nice link and cliffhanger into the next book which will leave some readers desperate for the next book I am sure! I’m certainly looking forward to seeing what happens to Freya and the tribes in the next book.

I am a huge fan of Celtic history, are there any other Celtic inspired books that you think I should read?

View all posts by thebookishfairyblog

QOTD: What are you up to this weekend? I’m doing Wedding related jobs! . . Me, this morning: Oh writing wedding invites by hand will be so much fun! 💍👰 Me, having written 3 invites: how many more left? 😩😩😩 . . I am loving wedding planning though, bring on August! . . #wedding #2020bride #invites #planning #organisation #bride #bookstagram #bookstagrammer #bookblogger #motivation
Sunday is the day for books and tea 📖 what are you reading or doing today? ☺️📖 . . #bookstagram #bookstagrammer #books #tea #bookblogger #reading #tbr #cosy #sunday #ukya #ukblogger #ukbookstagram
Very excited to be seeing &Juliet!